More and more optical network elements are now using IP based management networks. However, a large installed base still uses OSI based management network. IP and OSI networks are not compatible, so how to make these heterogeneous systems coexist and interoperate? At network level, the solution is to use tunneling. Then OSI networks can be used as datalink for IP traffic or IP networks can be used as datalink of OSI traffic. Nodes remain incompatible but can be used transparently to convey traffic. Installing tunneling functions at the border of each world allows to mix heterogeneous Data Communication Networks.

Marben provides a highly flexible solution to interconnect TCP/IP and OSI networks in a transparent way, hiding all complexity to the applications.

The IP Tunneling product ensures the encapsulation of IP packets in CLNP PDUs. This product allows IP end-to-end communication between two systems, across an OSI network. For instance, an SNMP manager can take advantage of an existing SONET OSI DCN to exchange messages with the SNMP agent of a remote Network Element that sits on the other edge of this SONET DCN. IP tunneling product shall be installed on systems that sit at the boundary between the OSI network and the IP network. The product maintains a mapping between IP addresses and OSI NSAP. It also offers filtering capability to prevent every IP packet to be tunneled across the OSI network. 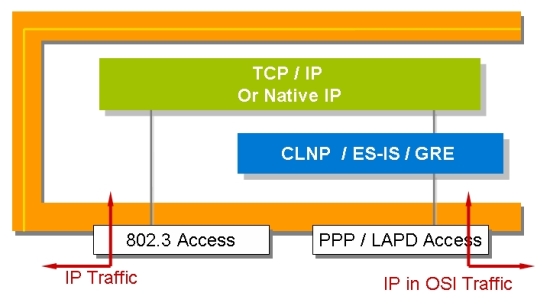 Tunneling solutions are generally somehow static. This means that network elements need to be manually provisioned with all possible tunnels across the network. This is a tremendous issue when deploying a network or when upgrading it. To speed up and ease the network set-up, the encapsulation of packet in incompatible network has to be automatic.

The ITU-T G.7712 standard defines a solution to dynamically handle GRE encapsulation of IP packets over CLNP and CLNP packets over IP based on the standardized usage of IS-IS. IS-IS is designed to route both CLNP and IP packets. Extensions to IS-IS allow "auto-encapsulation capable" network elements to encapsulate and forward transparently traffic across incompatible IP and OSI interfaces. Packets are un-encapsulated as soon as network becomes compatible.

Our Auto-encapsulation (G.7712) product provides a seamless solution with no manual provisioning to interconnect IP and OSI networks. 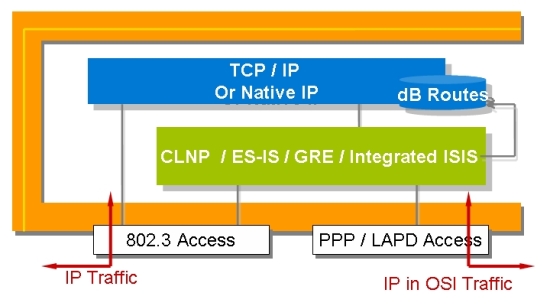 Our CLNP Tunneling over TCP/IP offer

The CLNP Tunneling product ensures the encapsulation of OSI NPDUs in TCP/IP. This product allows OSI end-to-end communication between two systems, across a TCP/IP network. The CLNP Tunneling product uses TCP connections to simulate point to point subnetworks between two systems at the boundary between the OSI network and the IP network. CLNP, ES-IS and IS-IS PDUs can be exchanged over such TCP connections, thus allowing the OSI routing protocols to route CLNP PDUs between the OSI islands interconnected by the TCP/IP network.