The control of MPLS or GMPLS network demands efficient path computation engine to provide paths that:

In the MPLS and GMPLS architecture the path computation was typically performed inside network elements. However, this approach has shown some limitations due to:

That is why IETF has a proposed a Path Computation Element (PCE) Based Architecture as defined in RFC 4655.
It defines the use of a new functional equipment called PCE in charge to compute the path on any client request using complex algorithm and Traffic engineering information collected through routing protocols. 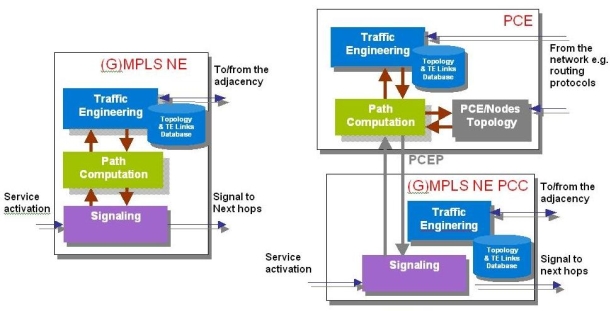 Composite PCE versus an External PCE

This architecture is mainly formed of 3 types of protocols:

The PCE protocol that has been elected is a new IP protocol acting as a client server protocol with extensions that enable cooperation between PCE to solve inter domain routing. Find below the scheme for such.

The MARBEN PCE offers a user-friendly flexible API on top of a complete protocol stack to ease and speed up the integration of PCEP feature inside a network element either as a PCC or as a PCE.
It is fully conformant with IETF PCEP standards and also supports extensions such Exclude Route, Objective Function, PathKey protection and Global Concurrent Optimisation.

Marben is closely and actively following IETF PCE working group to maintain its implementation up to date with latest extensions required by its customers.

These two PCE modules could be augmented with MARBEN routing offer running ISIS-TE or OSPF-TE as addition. Marben products also provides constrained path computation algorithm that could be customized and used to build a PCE offer. 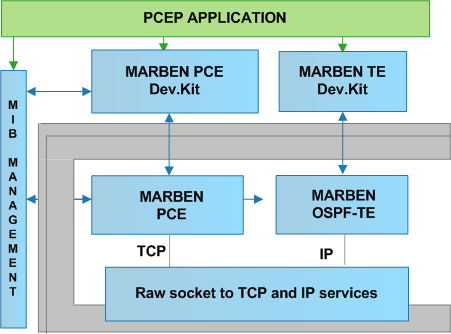