MPLS-TE brings explicit routing capabilities to MPLS networks. An originating Label Switching Route (LSR) can setup/tear down a TE Label Switched Path (LSP) to a terminating LSR through an explicitly defined path containing a list of intermediate LSRs. An offline tool or a Path Computation Element can perform path computation independently and leaves TE LSP signaling to the LSRs. Computation might be partial with loose routing mechanisms that lets the intermediate or boundary LSR to complete the path.

MPLS-TE supports also local repair of TE LSPs using Fast ReRoute (FRR) mechanism. The node immediately next to the failure is responsible for rerouting the traffic and is the headend of the backup TE LSP. FRR can reroute traffic in tens of milliseconds as per RFC 4090 defines. This mechanism can be used in link failure and even node protection.

The capability to reroute an established TE LSP is critical in case of administrative maintenance for preplanned intervention or bandwidth modification or also in case of failure or disruptions. Of course in such case, it is desirable not to disrupt traffic, or adversely impact network operations while LSP tunnels rerouting is in progress. This adaptive and smooth rerouting requirement necessitates establishing a new LSP tunnel and transferring traffic from the old LSP tunnel onto it before tearing down the old LSP tunnel. Because the old and new LSP tunnels might compete with each other for resources on network segments which they have in common, this competition can result the new LSP tunnel from being established. As defined in RFC 3209, using RSVP to establish LSP tunnels solves this problem "very elegantly" by using such so called Make-Before-Break mechanism.

Marben provides a ready made controller that interacts between the protocols needed MARBEN RSVP-TE, MARBEN OSPF-TE or MARBEN ISIS-TE, the MPLS cross-connect fabric and the management protocols of the nodes. 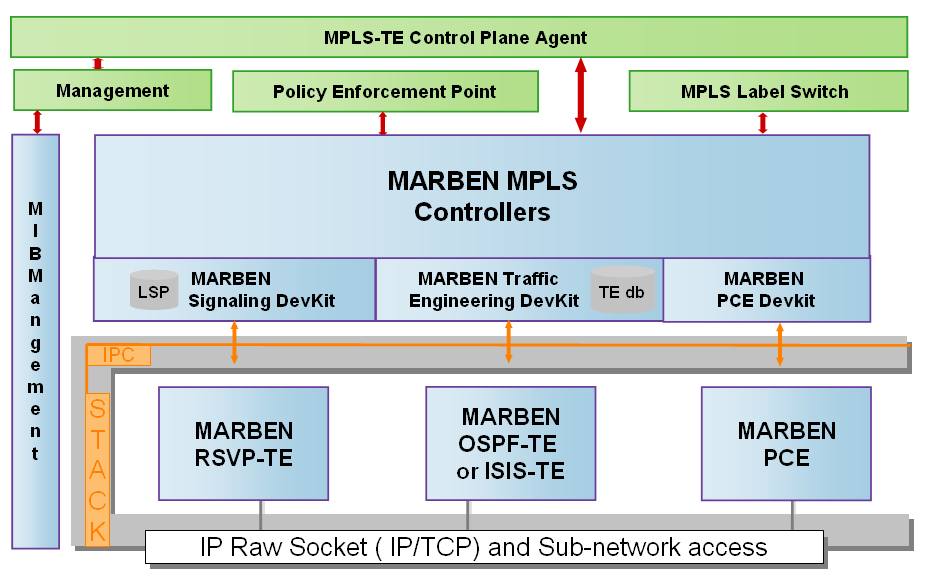 As an extension of the MPLS-TE framework and as a consequence of the Marben' GMPLS expertise, Marben does supply also the End-to-End protection as per RFC 4873 as a ready made features into such controllers:

The controllers may also interact with MARBEN PCE depending the policy applied to the path computation, locally or through the help of a Path Computation Element.

MARBEN MPLS controllers have been used also with third party offer for the routing, and thus demonstrating its modularity in the field.